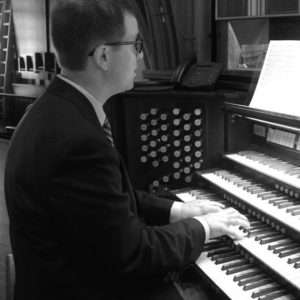 BRUCE LUDWICK, JR., is Director of Music and Organist at the Cathedral of Saint Paul in Birmingham, Alabama. Mr. Ludwick manages a liturgical music program composed of the semi-professional Cathedral Choir, Men’s Schola, Ladies’ Schola, Childrens’ Schola Cantorum, and cantor corps; he also serves as director of music for all diocesan liturgies at the Cathedral. He was formerly Director of Music and Organist at St. Gabriel the Archangel Church in St. Louis, Missouri. Ludwick has served Roman Catholic, Disciples of Christ, Episcopalian, and Church of the Brethren congregations in Missouri, Texas, West Virginia, and Pennsylvania, and has concertized in these states as well.

Ludwick earned the Master of Music in Organ Performance with Emphasis in Sacred Music at the University of Texas at Austin where he studied with the late Gerre Hancock, Organist and Master of the Choristers Emeritus, St. Thomas Church, 5th Avenue. He earned the Bachelor of Music in Organ Performance and Music Education from West Virginia University as a student of William Haller. Other organ study was with the late David Craighead and Alan Lewis; his conducting study was with Kathleen Shannon.

Ludwick is Sub-Dean of the Birmingham Chapter of the American Guild of Organists and maintains a special interest in Gregorian chant, early music, and children’s music for the Catholic liturgy. A native West Virginian, he lives in Birmingham with his wife, soprano Erin (Montalto) Ludwick, and sons, Joseph, Peter, Thomas, and Maximilian (Max). He is proud to be a founding member of Highland Consort!