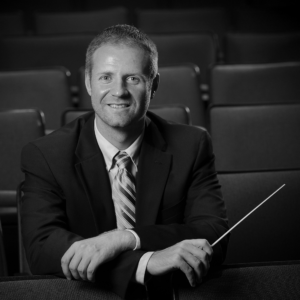 BRIAN KITTREDGE, Baritone, is Associate Professor Music and Director of Choral Activities at the University of Alabama at Birmingham, where he conducts the University Concert Choir, Chamber Singers, University Chorus, and teaches courses in conducting and music education.

Under his direction, the UAB Choirs have gained a strong presence regionally, nationally, and internationally. Most recently, the UAB Concert Choir was invited to perform at the 2017 London Sangerstevne and CantaRode International Choral Festivals in England and The Netherlands. Other international invitations include performances at the 2014 Interkultur World Choir Games in Riga, Latvia, where the choir earned Gold and Silver medals in three categories. Other notable performances include the 2012 and 2016 AMEA Conferences, masterworks with the Alabama Symphony Orchestra, and annual concert appearances throughout the eastern United States.

Prior to his appointment at UAB, Kittredge served on the faculty at Louisiana State University, where he taught courses in choral conducting and conducted the LSU Schola Cantorum. He also taught middle and high school at the Louise S. McGehee School in New Orleans, LA, where his choirs appeared in performances at state, regional, and international festivals.

Kittredge is an active guest clinician and conductor, most recently serving as guest conductor at the International Institute for Conductors in Bacau, Romania, and for the 2016 Organization of American Kodaly Educators National Chamber Choir in Long Beach, California. He is an active member of NAfME, OAKE, and ACDA, and holds a Doctor of Musical Arts degree from Louisiana State University (2011), a Master of Music degree from the Eastman School of Music (2004), and a Bachelor of Music degree from Mansfield University (2002).